Lace n Ruffles went behind the scene of this year’s CommBank Natural Fibres Fashion Parade Brisbane and hung out with the local design sweetheart Gail Reid, whose label Gail Sorranda has caught the eyes of fashion a-list including Karl Lagerfeld and Stefano Gabbana.

As sweet as she seemed with her candy-colour outfit and charming smile, it didn’t take long for me to discover her ‘dark side’. There’s something truly captivating behind her black lace wedding veil…

Me: I read that you’ve lived in Paris and London. Where are your go-to places for inspirations in each city?

Gail: I really like those old cementary, because I thought they’re really beautiful. They’re like park with ivy growing all over the angels. To me, they’re kind of spiritual like outdoor garden churches. I always thought it’s beautiful how you see the old Frenchmen visiting the graves of their wives and watering their flower pots, it’s so cute!

I also love to head to the markets and local restaurants. I’ve met a guy who’d wear the same outfit every single day – black high heels, black leather pants and black eyeliners. We started chatting and he showed me films that he’s worked on, and said to me how he’s witnessed a murder. He’s like a really interesting person. Those are the sort of things that I find inspiring, and places that have got history and feelings.

Me: Congratulations on joining the ‘Mrs’ league! Where did you have your wedding? What was your wedding style?

Gail: Thank you! It was up in Mount Tamborine (Gold Coast Hinterland). I designed my own wedding dress and it was made in Italy. It’s something I love – bigger sleeves, the cape and drape and fitted silhouettes. I had a black spiderweb-like lace veil.  I was going to wear all black, black veil and black dress but then I thought black and white would be better for lights and contrast in photos.

Me: Show us your engagement ring?

Gail: This ring is made by a French jewelry designer, my partner and I picked it together when we were in Paris.

Me: Was it love at first sight for you with this ring?

I can see that Gail’s awe-inspiring design, which is often described as a vivid display of ‘Gothic romanticism’ comes from her interesting persona.

This post is written from my interview with Gail for my guest post on the Ekka blog. Gail Sorranda together with a number of other Australian top designers will be showcased in this year’s Ekka program. Check out my full interview with Gail Reid here. Can’t make it to her Brisbane show? Here are a few pieces from her current collection which are my personal favourites… 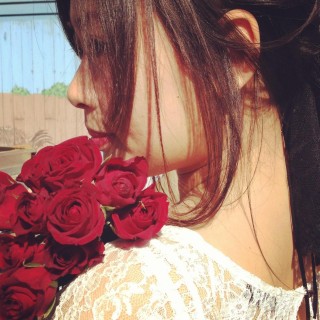